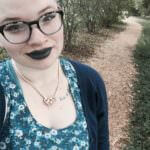 I ate an brownie once.
Not a kids birthday party brownie.
Three hours later I remember saying,
“I don’t feel anything should I eat more.”
Within minutes I found myself ordering dinner at a restaurant.
A fried mac and cheese grilled cheese sandwich.
I laughed until I cried at how big the sandwich was.
We were waiting in line for a concert later.
The girl in front of us was holding a chihuahua.
It was cold.
Like, the why am I outside type of cold.
The chihuahua girl was turning into Satan.
Red face and horns.
In the background, everywhere I looked,
all my worst memories were on display.
Projecting onto a snow globe amphitheater screen.
I kept thinking is this fun?
Is this fun yet?
I was trembling, the way most people do when Satan is showing you your traumas while holding a small yappy dog.
I pulled up Uber on my phone.
It took a while because I forgot I had fingers.
Typed in hotel.
The Uber driver,
I was sure,
was not my real Uber driver.
Our hotel felt hours away.
I was convinced he was taking us to the wrong hotel..
Which he was.
This happens when you just type in hotel.
I was trembling, the way most people do when you flee from Satan and his wrath and his dog in a strange city in a strange car with a man who looks nothing like his picture and you’ve only typed hotel into the address and not even the right hotel.
Our next driver asked why we were hotel hopping.
I lied and said our last Uber driver was not to be trusted.
Which wasn’t all that much a lie at the time, seeing as he wasn’t our REAL Uber driver.
When I got home I found half of my sandwich tucked in my purse.
It still wasn’t fun yet but I laughed until I cried again anyways at that big fucking sandwich.